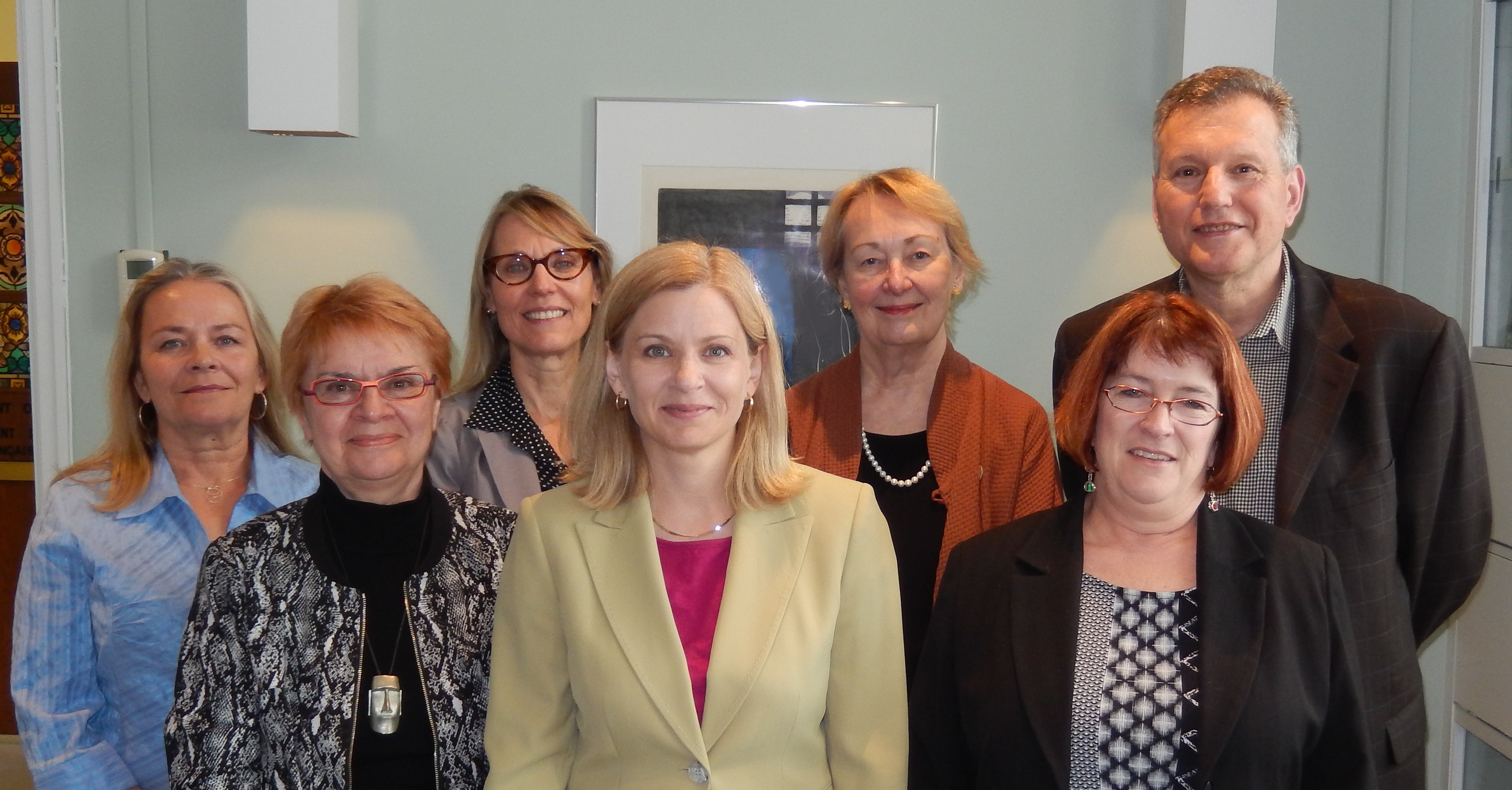 First and foremost, we would like to thank our many research assistant for their hard work, meticulous eyes and dedication to this research project:

And a special thanks to project coordinator Chris Ryder.

Dr. Chantal Richard (UNBF) is the principal investigator and has published numerous articles and conference papers on Acadian and Loyalist studies, cultures and languages in contact, and computer-assisted text analysis. As principal investigator of a previous ITST grant, she led teams of specialists in Loyalist and Acadian studies in developing a methodology for the computer-assisted comparison of bilingual corpora. Dr. Richard has been co-investigator of other SSHRC-funded projects including “Literary Ferment” led by PI Tony Tremblay (CRC, St. Thomas) and “Éditions critiques des oeuvres fondamentales de la littérature acadienne” led by PI Denis Bourque (Université de Moncton). She is also the co-author of a critical edition of the Conventions nationales acadiennes in three volumes and the author of a critical edition of Poèmes acadiens de Napoléon-P. Landry, as well as co-editor of the Journal of New Brunswick Studies/Revue d’études sur le Nouveau-Brunswick.

Dr. Sheila Andrew (STU) is the author of The Development of Elites in Acadian New Brunswick, 1861-1881 (McGill-Queen’s University Press, 1996) and has also published research on Acadian concepts of British nationality in the late nineteenth century (Journal of Intellectual History, Fall 2004). She examined the adoption and adaptation of an Acadian national image by the educated elite and will be looking at Acadian attitudes towards war in the First World War.

Dr. Nicole Boudreau is an Associate Professor of French at the University of Maine at Fort Kent. Her research interests include Acadian identity, language and literature, as well as gender studies. Her interests also include filmmaking, photography and Acadian popular culture. She is currently working on a collection of essays and is making a documentary film on Acadians of the diaspora and their hobbies.

Dr. Denis Bourque (U de Moncton) is the author of many articles and books on Acadian literature, and was Principal Investigator of a SSHRC-funded project titled “Édition critique des oeuvres fondamentales de la literature acadienne,” He is also co-author (with PI, Dr. Chantal Richard) of Les Conventions nationales acadiennes (1881-1937) in three volumes and director of the collection Bibliothèque acadienne.

Dr. Anne Brown (UNBF) has authored numerous articles, book chapters and conference papers focusing on identity and gender politics in novels written by francophone women. She has coedited two books: Les littératures d’expression française d’Amérique du Nord et le carnavalesque (with Denis Bourque, 1998)and International Women’s Writing: New Landscapes of Identity (with Marjanne Goozé, 1995).  She was a co-investigator in an ITST (SSHRC) funded project: “Developing a Model for the Computer-Assisted Analysis of Bilingual Corpora” (Principal Investigator was Chantal Richard, 2010-2012). She is a member of  the editorial board  of Studies in Canadian Literature/Études en littérature canadienneand has served as an editorial board member of the Journal of New Brunswick Studies/Revue d’études sur le Nouveau-Brunswick. Her current research focuses on Acadian women and minority cultures as well as the use of technology in language learning.

Dr. Margaret Conrad (UNB), Professor Emerita, Department of History, is currently involved in the SSHRC-funded (2008-2015) History of Education Network/Histoire et education en réseau (THEN/HiER). A co-applicant in the Canadians and Their Pasts initiative funded by a CURA grant (2006-2012), she is co-author of a book on how Canadian engage the past in their everyday lives, published at the University of Toronto Press in 2013. She is author of A Concise History of Canada, published by Cambridge University Press in 2012, and is writing a history of Nova Scotia for the University of Toronto Press.

Dr. Gwendolyn Davies (UNB) is a co-investigator on a SSHRC-funded research team on "Literary Ferment in New Brunswick" (Dr. Tony Tremblay, CRC, St. Thomas University, PI). Her chapter, “Loyalist Literature in New Brunswick: 1783-1843,” will appear as part of the project’s research in a book edited by Dr. Tremblay and currently with a university press. Her work on Loyalist printers, " New Brunswick Loyalist Printers in the Post-War Atlantic World: Cultural Transfer and Cultural Challenges” appeared in Jerry Bannister & Liam Riordan, eds., Loyalism in the Atlantic World (UTP, 2012), 128-161, and her edited book (with Introduction), Fiction Treasures By Maritime Writers. Bestselling Novelists From Canada’s Maritime Provinces 1860-1940, will be published by Formac in 2015.

Dr. Cécilia Francis (STU) has published numerous refereed articles and book chapters on women’s writing. Most notably she has produced a series of articles on the Acadian writer France Daigle (2003a, 2003b, 2006). She is the author of a book based on female life writing (2006) and co-editor of a volume entitled Trajectoires et dérives de la littérature-monde. Poétiques de la relation et du divers dans les espaces francophones (2013). She was a research associate with R. Clews in the development of a university research center based on New Brunswick (New Brunswick Atlantic Studies Research Development Centre), funded by SSHRC (2005). She is an editorial board member of the Journal of New Brunswick Studies/Revue d’études sur le Nouveau-Brunswick and is currently co-editing a collective book entitled, La littérature acadienne au tournant du 21ième siècle.

Dr. Bonnie Huskins (UNB\STU) was a co-investigator for the “Developing a Model for the Computer-Assisted Analysis of Bilingual Corpora” pilot project led by Dr. Chantal Richard. Her ongoing research examines community formation among Loyalist exiles who settled in the Maritime colonies. Her article entitled “`Shelburnian Manners’: Gentility and the Loyalists of Shelburne, Nova Scotia” was published in the winter 2015 volume of Early American Studies. She is also interested in the transatlantic communities formed by members of the Loyalist diaspora and she has an interest in the analysis of diaries and other personal documents. She is currently working on a manuscript based on the diaries of a working-class homemaker from Saint John, NB, who kept daily entries from 1945-1992.

Dr. Gregory Marquis (UNBSJ) is principal investigator of a SSHRC-funded project titled: “The Royal Canadian Legion in New Brunswick: Responsibility and Remembrance.” Dr. Marquis has also received SSHRC and Atlantic Metropolis Centre funding as applicant and co-applicant for numerous other projects on the history of New Brunswick and Canada. He is also conducting ongoing research on popular music and public history in New Brunswick and working on a history of policing in Canada.

Dr. Sasha Mullally (UNB) is the author of a several articles on the intersections of rural health, the profession of medicine, and women’s history. Her first book examined changes in rural health care and the lives of country doctors in the Maritime provinces and northern New England from 1900 to 1950 entitled Unpacking the Black Bag (Toronto, forthcoming). In recent years, she has begun a SSHRC-funded research project that explores the gendered professional and community roles of women health care providers in Nova Scotia and Massachusetts from 1880 to 1930, paying special attention to early occupational therapy and the promotion of “therapeutic craft.”  Additionally, she and Dr. David Wright (McGill) are co-authoring a book on the transnational history of physician migration in the second half of the twentieth century, looking 'outward' from Canada.

Erik Moore is the director of the Centre for Digital Scholarship at the University of New Brunswick and offers considerable expertise in e-publishing, digitization and database creation.